Earlier this month, Pantone announced their 2017 Colour of the Year, and it’s looking…well…green. As opposed to the muted tones of their 2016 offering (Serenity and Rose Quartz), next year’s colour, Greenery, is bold. Describing it as ‘fresh and zesty’, Pantone said Greenery was chosen for its representation of the natural world and our growing desire to unplug and reconnect with our physical environment. Pantone feel it is a revitalising shade, symbolic of new beginnings. This is good news for workplace design as Greenery is the perfect colour to inject life into the sometimes grey landscape of the workplace.

With biophilic design and retro patterns gaining popularity recently, there are plenty of Greenery options already on offer for 2017. Interface have carpet covered with their Employ Lines (above), Human Nature, Scottish Sett, and Urban Retreat collections all sporting the Pantone 2017 Colour of the Year.

Camira has a host of fabrics for Greenery to be incorporated on task chairs, sofas and armchairs too. Their Nettle Nomad, Hebden and Landscape Contact ranges all have retro Greenery tones to choose from.

In case that still isn’t enough of the Pantone 2017 Colour of the Year, Fritz Hansen, Vitra and Herman Miller have Greenery options in some of our favourite furniture pieces, such as Series 7, Alcove Family and the Sayl Chair.

However you might like to introduce the Pantone 2017 Colour of the Year into your workplace, there are plenty of options available. Here at Corporate Workspace we just completed our own office reboot…and the main colour chosen for the new additions? Greenery, of course.

Announced recently were three new collections to Interface Carpets‘ already burgeoning range of Skinny Plank designs: Equal Measure, Near and Far and Narratives. If you’re unfamiliar with the Skinny Plank concept these are 25 x 100cm carpet planks that can be used to create similar patterns to those found on timber or vinyl flooring such as ashlar and herringbone designs. Collections so far have largely focused on biophilic designs. These new collections continue this trend further, focusing specifically on man’s interaction with and interpretation of nature. Andrew Frost of Interface introduced us to the new ranges in the flesh. 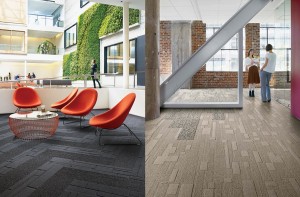 Equal Measure is inspired by traditional cobblestone streets and the juxtaposition between man-made and natural surfaces. The range is offered in a palette of eight subdued colours combined with irregular patterns to create the look of a lived-in street. In common with previous Skinny Plank designs, Equal Measure includes a full feature tile (EM553), a transition tile (EM552) and a more simple field tile (EM551). 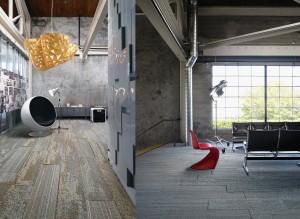 Near and Far evokes natural materials such as wood and stone that have been weathered by wind and rain or carved by man. Available in eight colour-ways – Driftwood, Shale, Linen, Hemp, Walnut, Felt, Wheat and Mineral – the Near and Far collection features two planks: Subtle grooves run the length of the NF400 tile whilst more variation and texture is introduced to the NF401 tile. 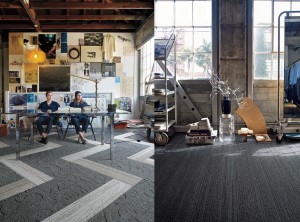 As the name implies, Narratives is inspired by the stories of objects, what we see around us and finding meaning and patterns in everything we see like patterns of tea leaves. Hence, the names of the eight colour-ways; Ginger, Wasabi, Chai, Ginseng, Sesame, Darjeeling, Oolong and Fennel. A figurative scroll pattern created by height contrasts features on the NS230 tile and the NS231 tile is defined by a linear pattern with less contrast in height.