From tomorrow the repeal of section 52 of the Copyright, Designs and Patent Act 1988 means that furniture designs in Britain are protected from unlicensed manufacture for 70 years, up from 25 years. Classic designs such as Mies van der Rohe’s Barcelona by Knoll, Arne Jacobsen’s Egg Chair by Fritz Hansen and the Eames Lounge chair by Vitra are once again fully copyrighted. Retailers selling unlicensed copies will be liable to fines up to £50,000 and jail terms of up to 10 years.

Just some of the many designs that will once again be under copyright protection in the UK: Eames Lounge Chair by Vitra, Mies van der Rohe’s Barcelona by Knoll Studio & Verner Panton’s Swan by Fritz Hansen

A quick google search reveals quite a lot of vehement hostility aimed at the new law and its promoters, with some branding the likes of Vitra, Knoll and Herman Miller as ‘thieves’. Many of the naysayers are members of the general public who wish to furnish their homes cheaply and care little for the manufacturing provenance of the product or its future value. They complain that it shouldn’t cost for example £4500 for a lounge chair or over £1000 for a dining set for your home. Whilst this may be true the problem is less about individuals (although this all adds up) but well known national and multi-national brands who are buying fakes en masse for roll-outs in offices, cafeterias and restaurants. Even well known supermarkets have got in on the act with special promotions.

Of course, many of these commentators display a complete ignorance of the design, research and development process and its costs and seem to think that tooling never needs to be replaced. Nor do they acknowledge the cost of promotion without which these classics would be unknown failures and there would be no market for the replica manufacturers. They also fail to acknowledge the continual development that genuine manufacturers put into these products as well as investment in R&D for future products. For example, Verner Panton’s ‘Panton’ chair by Vitra has only fairly recently been sold as originally intended due to material limitations, the Bertoia Side chair by Knoll Studio is now available with a much more cost conscious plastic shell and the Eames Lounge Chair itself was improved upon after release, not being fully realised until the mid-60s.

An oft touted defence of replicas is that the Eameses stood for accessible and affordable design for the masses. However, the replica market is largely filled with poor quality products made with cheap Far-East labour in factories with dubious environmental credentials. Was that really what Charles and Ray Eames stood for? It’s also well known (but conveniently ignored by many) that Charles and Ray Eames themselves fought against fakes, even going so far as to create a ‘Beware of Imitations’ advertisement for Herman Miller in 1962.

Recent furniture innovations: Joyn benching and Alcove sofas by Vitra kickstarted the agile working revolution. Continuous development: the Aeron by Herman Miller now released as a Remastered version and the Bertoia Side Chair by KnollStudio now available as a plastic shell.

Is it time for 21st Century Classics?

Herman Miller can hardly be accused of resting on their laurels, especially in the task seating market with innovations and developments such as the Aeron (a new revised Aeron Remastered has recently been launched that utilises up to date materials and mechanisms), Mirra, Embody, Sayl, and Keyn chairs. Vitra also continue to sponsor new designs and designers, with innovations such as the Alcove sofa and Joyn bench by Ronan & Erwan Bouroullec, two products that have been massively influential in the changing work patterns of the early 21st century office environment.

The key here though is the focus on innovations in the office environment. New – and more importantly affordable – design in crossover lounge and dining furniture that may be used in the office or the home seems less prevalent.

We love mid-century design but it’s too often used as a default, redefined or copied. Has this led to design stagnation? Certainly, there is still innovation in the furniture industry but new designs are often overlooked by architects and interior designers in favour of the safe option. There are already many good modern designs and designers out there but it’s difficult to get new designs recognised when the market is flooded with cheap copies of classics.

Why should the fakers circumvent the processes of design, research & development, prototyping and promotion? With the new legislation comes new challenges. Whilst some of these companies will seek to find loopholes to circumvent the new legislation (we have heard of one company importing to Ireland where fakes are not illegal and then 3rd party freight forwarding to the UK) it would be hoped that others will choose to focus on new products and to employ the next generation of designers to create their own design classics. This is certainly a challenge, but not one without rewards for the bold.

Specifiers, architects and designers must also play their part and seek beyond the obvious. Part of this is through education and here companies like ourselves must be pro-active in engaging with the design community to impart a broader product knowledge.

Finally, the responsibility also lies with the consumer. Just like more and more people inform themselves of the ethics of what they eat or what car they buy, they should also think about how they furnish their homes.

We’ll end this article with an unashamedly mid-century quotation from Charles Eames himself, taken from Herman Miller’s Design Q+A.

Q: What designs would tend toward ephemeral or towards permanence?

Eames: The good stuff is permanent, the bad stuff goes away. (1959)

Design icon, movie star, the Walter Knoll classic: FK turns 50. Designed by Danish interior architects Preben Fabricius and Jørgen Kastholm in 1967 ( the name was derived from their surnames), the FK bucket chair with its striking curved contours has had a remarkable career: from Herrenberg to Hollywood (Meryl Streep sits in an FK in “The Devil Wears Prada”), from the very first prize for “Good Design” awarded by the German Design Council in 1969 to a design icon that can be found in executive offices and living rooms, conference rooms and hotel lounges around the world. How did FK become such a timeless classic? Learn more about the FK story here. 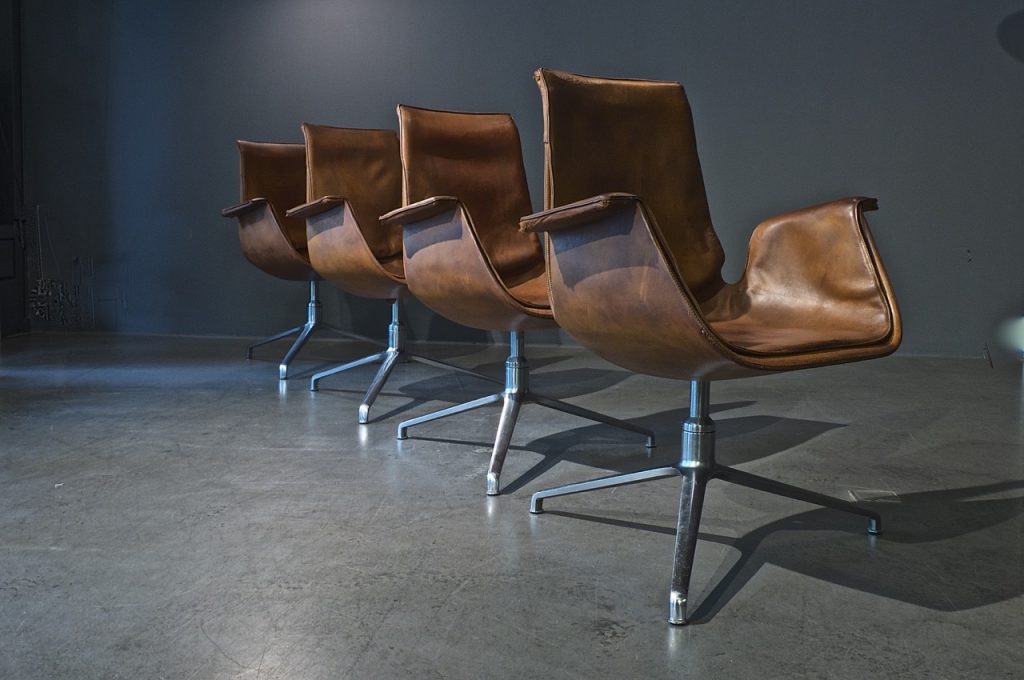 Designed by Jasper Morrison in 2016, Vitra‘s new All Plastic Chair is reminiscent of the classic wooden chairs that have been familiar in Europe for many decades. Utilising dyed-through polypropylene, the chair represents a significant advancement in the appearance and functionality of this style of chair.
The graceful design combines great stability with excellent comfort; its backrest is attached to the frame with resilient connectors that allow it to flex in response to the sitter’s movements.
Suited for both indoor and outdoor use the All Plastic Chair comes in a choice of two-tone colours: White, Ice grey, graphite grey, ivy, brick, brown and buttercup.